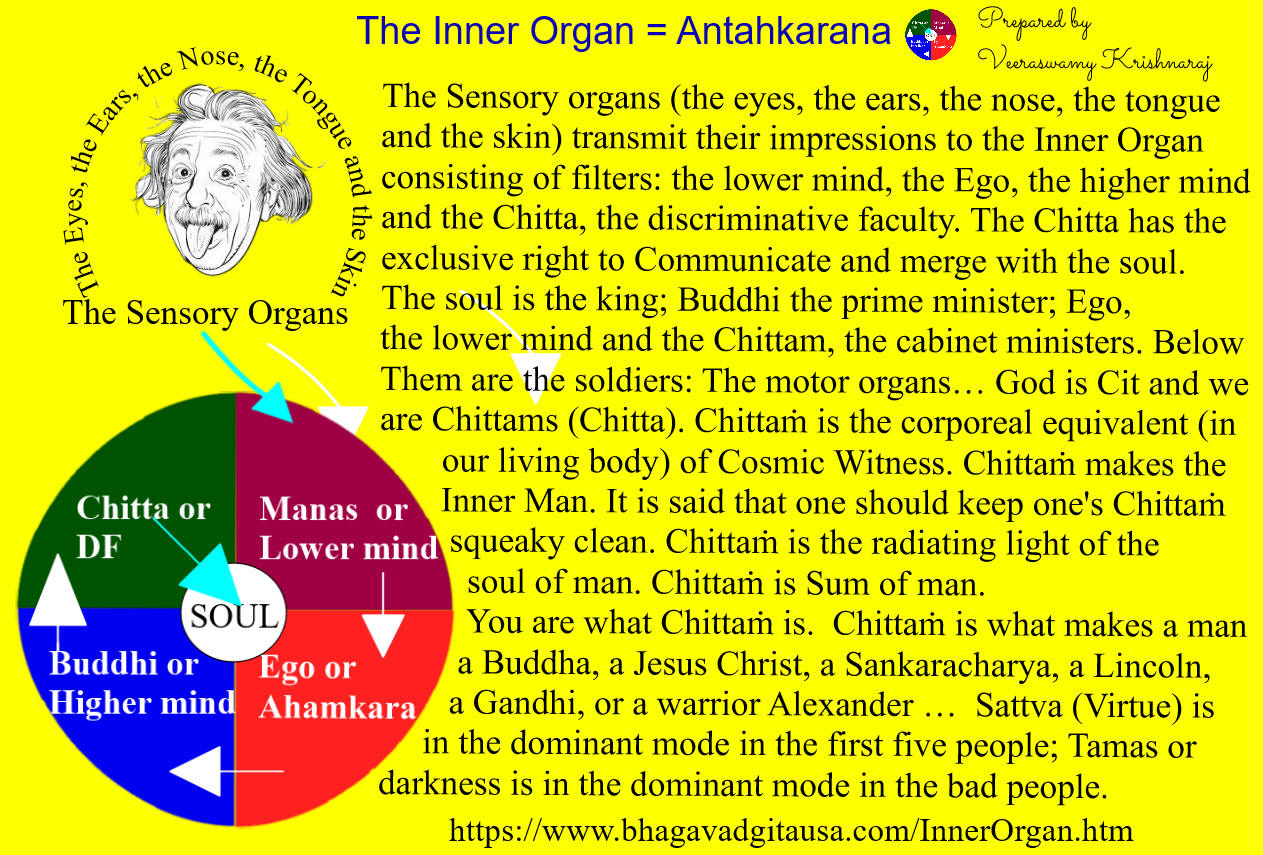 If the human mind (Citta) dissolves in universal consciousness (Cit), the yogi observes that the universe is an expression or projection of that Consciousness.

Soul is the king; Buddhi is the prime minister; Ahamkara, Manas, and Cittaṁ are cabinet members; then come down the line the five karmendriyas, five Jñānedriyas, five Tanmātras and five Bhūtas.

He is Sat-Cit-Ananda (Being-Consciousness-Bliss).  God is Cit and we are Cittaṁ. The chasm is wide.

Cittaṁ is the corporeal equivalent (what is in our living body) of Cosmic Witness. Cittaṁ makes the Inner Man. It is said that one should keep one's Cittaṁ squeaky clean. Cittaṁ is the radiating light of the soul of man. Cittaṁ is Sum of man. You are what Cittaṁ is.

When you see an apple, your Inner Organ (Cittaṁ) must morph itself to the shape, size, color, odor, taste... of an apple; then only you see an apple in its completeness. You see an apple; you (your Cittaṁ) become an apple; you hear music, you become the music. All that happens in your Cittaṁ. Cittaṁ is the seat of deep contemplation (meditation). Whatever is contemplated in depth in Cittaṁ, that it becomes; that a man becomes. Cittaṁ becomes the repository of Sattva, Rajas and or Tamas in one mode or any of its combinations, one becoming more dominant than others. Cittaṁ is a sage, a warrior, a killer.... If Cittaṁ becomes the repository of malignant behavior such as murder, extreme greed etc, they leave a permanent imprint and may never leave a person.

Cittaṁ is what makes a man a Buddha, a Jesus Christ, a Sankaracharya, a Lincoln, a Gandhi, …  Sattva (Virtue) is in the dominant mode in the first five people; Tamas or darkness is in the dominant mode in the bad people. If you don't give in to the onslaught of distracting thoughts and keep Siva constantly in your Cittaṁ, Sivam you become or Jesus you become in Christian tradition. Thence all your actions are His. Cittaṁ is Sūkshma Śarīra or subtle body.

Cittaṁ is the subtlest. Less so progressively are Buddhi, Ego and Mind.

Saiva Siddhantist says, soul is the ever-awake knowing entity in wakefulness, deep sleep and dream sleep. The sense organs receive their respective stimuli (eyes perceive color and form, ears receive sound.) and pass them on to Antaḥkaraṇa, the inner organ which consists hierarchically of Cittaṁ (consciousness), Buddhi (Intellect), Ahamkara (Ego), and Manas (the Mind) and Cittaṁ supersedes Buddhi, Ahamkara, and Manas. Perception received by the inner organ reaches the soul, as the wave rolls to the shore.

Antaḥkaraṇa is the expression of Sākshin (Atman, Soul, Witness) and is compared to a ray which radiates from the Witness, God, Atman or Self. This emanation is called Vṛttis or ripples. Perceptions are compared to the waves reaching the Self. Thus, the waves travel to and from the Witness. Cittaṁ is like the RAM memory, remembering and forgetting; The forgetting is called Apohanaṁ and recall is known as Smṛti. Cittaṁ obtains knowledge from Buddhi and keeps it in storage. Apohanaṁ or forgetting is to move the knowledge to the back burner from the front of consciousness. It is not really forgetting; it is in storage. Smṛti or remembering or recollection is to move the knowledge from the back to the front. Thus, Cittaṁ is the shuttle moving memory from the forefront to the back and vice versa. In practical sense, Apohanaṁ is storage and Smṛti is recollection. 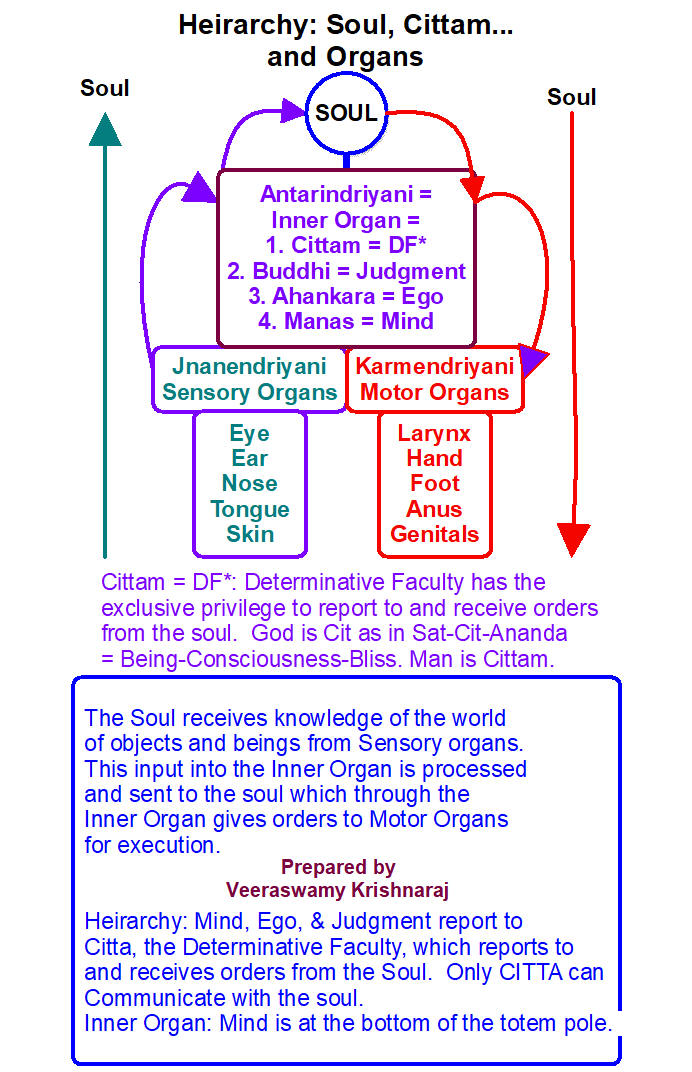 More on Apohanaṁ and Smṛti. Antaḥkaraṇa is the inner organ or the repository of Manas, Buddhi and Cittaṁ. Cittaṁ is a shuttle and moves knowledge back and forth from the front burner of consciousness or Buddhi to back burner and vice versa. When knowledge shuttles via the shuttle-express (Cittaṁ) to the front of consciousness, you call it Smṛti or remembrance; when knowledge is put in storage and not remembered, it is called Apohanaṁ (loss or forgetting); but it is available upon demand. Impressions; analytical interpretation; and storage and recall are the respective functions of Manas, Buddhi and Cittaṁ, which work like gears in the car; when one gear is on, the other two gears are disabled.

The Buddhi is less subtle than Cittaṁ, makes decisions and instructs the Mind which works in collaboration with the five Jñānedriyas (sense organs = eyes, ears, nose, tongue and skin). Mind serves as the blackboard whereon the sense organs register their impressions, which are converted as concepts by the mind and presented to Buddhi, which rejects most of them and keeps some as nuggets of knowledge. Buddhi-Cittaṁ keeps moving the knowledge back and forth between the front and back of the consciousness as Smṛti and Apohanaṁ with the help of Cittaṁ. Remember that Cittaṁ, Buddhi, Ego, Mind are one entity with different functions (Functional Polymorphism); thus, the name is according to its function. Example. Father is a son, a husband, an uncle, a grandfather, a father-in-law.... He is one person; his function is according to his title; he cannot mix his roles; when he plays one role, the other roles are switched off.

Antaḥkaraṇa is operational in two modes: External knowledge Acquisition (Abhina) and internal Self-Knowledge (Pratyabhijna) acquisition. In Abhijna knowledge acquisition, knowledge proceeds from the gross to the subtle, from the sense organs to Cittaṁ via Mind, Ego, and Buddhi. Sense organs report to Mind which reports to Ahamkara, which reports to Buddhi, which reports to Cittaṁ. As we proceed from Sense Organs to Witness, we are moving from a world of matter via the Mind, Ego, Buddhi and Cittaṁ to a world of Self, Pure Consciousness or Witness. Mind and others are matter, while Witness is Spirit. We are moving from matter to Spirit. In this centripetal movement, the perfected one realizes that he (the individual self) is one with the Witness or Self. Tat Tvaṁ Asi = That Thou Art = That you are. That Knowledge is Pratyabhijna (Spontaneous Recognition). We need the Mind, Ego, Buddhi and Cittaṁ to arrive at Sākshin or Witness. These are aids or way stations. Each entity churns and propels knowledge from one to the next. This churning is called Vṛitti. Once all entities have performed their functions, they undergo autolysis, self-destruction, immolation, a sort of psychic apoptosis (programmed death). By the way, these four entities are functional and not anatomical entities. You cannot have matter enter the realm of Spirit. The matter must die; Mind must die; Ego must die; Buddhi must die. The flesh dies and Spirit rises. Cittaṁ has the remembrance power (smṛti). All Vṛttis dissolve and matter is reabsorbed by Kundali as the Kundalini Sakti rises through the Chakras. This is the power needed for the Yogis to dissolve in the Witness and become one with It. As Sakti moves from one matter to the next to go to Spirit, each encounter with matter evokes a response, 'Neti Neti, Not this, Not this. Once each entity is studied and rejected, Sakti arrives at the Real Thing, Witness or Self. This is It. In Pratyabhijna mode, it turns itself inward and obtains Self-Knowledge. Abhijna is outbound, while Pratyabhijna is inbound.

Abhijna is to know God exists by knowledge; Pratyabhijna is to know Him by direct experience and knowing, Tat Tvaṁ Asi. I am that Siva. It is realization of the ever-present Reality. It is finding Anuttara, the One not having a superior or the Ultimate Reality.

In Kashmir Saivism, Pratyabhijna means Spontaneous Recognition. You are in spiritual search; your Guru says what you are searching is you; you and the object of your search are one; you and Self are one; Individual self and the Universal Self are one; You and Siva are one. One's true self is nothing but Siva.

What is the purpose of all this discussion? It is all about meditation. It is becoming one with the object of your meditation.

In successful Mantra meditation, Mind dissolves in Buddhi and Buddhi dissolves in Cittaṁ. Cittaṁ dissolves in the Self or Witness. This is essential for proper meditation. This sequential process has four parts to it: meditation by the mind, chanting of mantra by Buddhi, contemplation by Cittaṁ, eventual dissolution in the Self. It goes from thought-initiation to application to contemplation to dissolution. Cittaṁ keeps you in the 'groove’. You need Cittaṁ to keep meditation, concentration and contemplation in sync. Mind is a mechanical meditator; Buddhi is a fickle meditator; Cittaṁ is a serene meditator. Your aim is to graduate to and dissolve in Cittaṁ meditation and the self. Mind meditation and Buddhi meditation are out-bound meaning the thoughts are out-bound in the world of happenings; you are in the world of Nama and Rupa, names and forms. Cittaṁ meditation is inbound in the sense it is in step with the Atman, the Inner Soul, the Witness. Now the Cittaṁ goes into Smṛti mode (remembrance) and engages in deep contemplation. What does it remember? What do you mean by re-cognition (Pratyabhijna)? Cittaṁ remembers its organic connection to the Universal soul, the Self.... From before, Cittaṁ knew the Self, the Universal Soul and in meditation is re- cognizing the Soul.

For successful Mantra Meditation, an aspirant must have the following qualities. Santi = Serenity. Mind must be brought under control and trained not to chase after sense-objects under the false belief that they provide happiness.

Dantah = Control of Sense-organs. One must strive to prevent the sense organs from exploring the world of sense objects and impinging on the mind with sensual experiences.

Param uparatah = Withdrawal of mind. Mind is trained to forget the sense enjoyments of the past and desist from fancied sensual imageries.

Shanti Yuktah = forbearance. One should train oneself not to be disturbed and distracted by frustrations of daily living.