Speaking at a function organised here on Sunday to launch the 10-volume series of the English translation of Tirumandiram, he said such a publication house would showcase to the world the greatness of Tamil language.

Tirumandiram, written by Tirumular, comprises over 3,000 verses. The religious poetic work, written more than 1,500 years ago, consists of a dozen chapters that praise Lord Shiva, deal with spirituality and ethics, yoga and tantra. The English translation has been done by a team of scholars and edited by T.N. Ganapathy.

Rev. Dr.G.U.Pope says: "Saiva Siddhanta philosophy is the choicest product of the Dravidian intellect. The Saiva Siddhanta system is the most elaborate, influential and undoubtedly the most intrinsically valuable of all the religions of India. It is a peculiarly South Indian and Tamil religion. Saivism is the old prehistoric religion of South India, essentially existing from pre-Aryan times and holds sway over the hearts of the Tamil people" 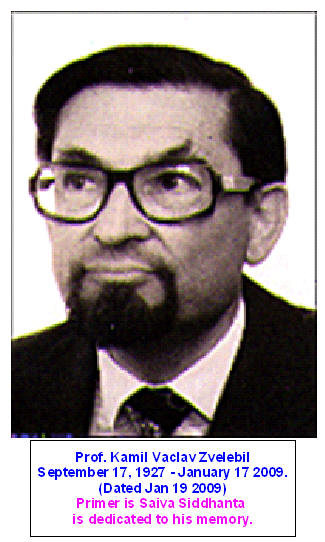 The Tamil cultural tradition is independent, not derived, not imitative; it is pre-Sanskritic, and from this point of view Tamil alone stands apart when compared with all other major languages and literatures of India. There exist in India only two great specific and independent classical and historically attested cultures - the Sanskritic culture and the Tamil culture. Tamil literature is the only Indian literature which is both classical and modern; while it shares antiquity with much of Sanskrit literature and is as classical, in the best sense of the word, as e.g. the ancient Greek poetry, it continues to be vigorously living modern writing of our days. 'Tamil, one of the two classical languages of  India, is the only language of contemporary India which is recognizably continuous with a classical past.'..."  The philosophical system of Saiva Sidhdhantha, a system, which may be ranked among the most perfect and cleverest systems of human thought--Prof. Dr. Kamil Vaclav Zvelebil

Saiva Siddhanta is beyond the apex of pyramidal structure of all religions that rises majestically from a broad base. Its base is Polytheism; its lower half is Monotheism; its upper half is Metatheism; Siva Siddhanta is Supratheism or Camayātītam (Samayatitam = சமயாதீதம் = The Supreme Being, as transcending all religions. Tamil Lexicon).  It does not need any support; it has no beginning, no middle, no end and no name. Supratheism is a word coined by me to illustrate its position compared to other pyramidal religions; in fact, it is not a religion; it is the Universal Truth. Man can ascend this pyramid to a comfortable or competent level. When he goes beyond the pyramid, there are no icons, Mantra, Tantra, Yantra or disputations between religions. Metatheism is immersion in and absorption of the emanating essence of unbranded Being (Generic God) without regard to any particular religion. The generic Being may be worshipped as an icon or a word. The mental and spiritual eyes, ears and perceptions of the worshipper are his organons. Drawing the hidden essence and meaning,  registering all visual, auditory and extrasensory vibrations emanating from icons, formulating them in words and phrases and laying down new paths are the essence of inspired religious prose and poetry of Metatheism. Some revealed Truths are beyond words. The object of all these constructs is to attain Moksa. (Author Krishnaraj's view).

Tirumantiram was composed by Tirumular (Ca200BCE). History tells us that he was a disciple of Guru Nandinatha. Tirumantiram = Tiru + mantiram = Sacred + incantation, formula = Sacred incantation. He came down from Himalayas to Tamil country. Tirumantiram is a repository of yogic and tantric knowledge and the mainstay of Saiva Siddhanta. Siva and Sakti form the centerpiece of devotion, worship and adulation.

Tirumular came down from up north to Tamil Nadu in search of Agastya Muni of Pothiya Hills. His name was Sundarar before he became Mulan; there is a lore that is mythical in its content and transformational in the life of Mulan. (Agastya = Agastiya = Agam + ti =  «¸õ + ¾£ = Inner + Fire  = Inner Fire = Kundalini Fire = One who has kindled his Inner Kundalini Fire = A Siddha = Perfected Yogi.)

As Sundarar-Tirumular was wandering in the countryside, he came across a herd of cows in grief and tears and a dead body of apparently the cowherd, who was bitten by the snake. Sundarar took pity on the cows and the cowherd; by yogic Prapti (transmigration into another body), he entered into the body of the cowherd and revived him back to life. Now the cowherd has the Tejas, soul, and Brahmavidya of Sundarar, while his own dead body was out of sight nearby. The cowherd, Mulan (the physical Mulan and the spiritual Sundarar), took the happy cows back to their cow pen. His wife could not see and tell any physical difference in her husband, but he was acting and talking like a yogi and would not enter the house. What would the wife of the cowherd do? She ran to village elders and sought their advice. They gave him a look up and down, spoke to him, and came to the conclusion that he became a yogi and his wife should let him go his way. The newly minted cowherd yogi, Mulan, went back to the pasture and looked for his former body, which for some unknown reason disappeared. What would the cowherd with Yogi's mind and soul do?  Sundarar became Mulan in body and not in other faculties. Sundarar thought that this was one of the plays of Siva and accepted the body of Mulan as his own as a matter of Siva's Grace. This episode whether real or not speaks of the Yogi who dies to his flesh, with the rise of spirit and takes the body of Mulan, which means Root, Origin (Pati, Siva). It is Mulan who is "bitten" by the serpent of Kundalini, rises from the base or root (Muladhara Chakra) through the lower Chakras reabsorbing all the Tattvas in each Chakra (involution, rising above material Tattvas (THATness), a centripetal march towards Lord Siva's Consciousness), dies to his flesh, and acquires the deathless body of Siva, a second body as Pati who leads the Pasus (animals, individual souls, the flock in Christian tradition) back home, the original repose of souls. Mular (r in the place of n)is an honorific way of addressing a noble soul.

Prapti has different meanings; one such meaning is as follows. Prapti is power to enter anywhere.  This includes ability to touch the sun, the moon or the sky. The Siddha can predict the future. He understands the language of birds and beasts, and unknown kind. Prapti is defined as ability to apprehend knowledge and perceptions perceived by the individual soul in his senses, which are presided over by god or gods. Once a Yogi or Siddha enters the body of another, he can perceive and modulate the feelings and perceptions of the the host's senses.

Dictionary: Prapti = Ability to reach anything like touching the moon with fingers. Isita = supreme dominion. Vasita = Subjugation by magic. Kamavasayita = suppressing all desires.

O Lord Ganesa, your holy feet took a special place in my consciousness. You have five arms: four feet and a trunk; your face bears the majesty of an elephant; your one tusk exceeds the beauty of the waxing crescent moon. Your wisdom is pure and without par; you are the dear child of Nandi.

(Nandi is the Vahana or the living transport of Lord Shiva. It is a white bull with a black tail. As a matter of submission and humility, the tail is tucked in, and the feet and the face are in repose.  It is a charging bull made tame by Lord Shiva. Nandi represents a devotee (of Shiva) whose passions are under control and whose devotion to Shiva is perfect. Some postulate Nandi was Shiva in animal form (theriomorphism) and when Shiva assumed a human form (anthropomorphism), Nandi transformed to its innate state. Animal form shows more authenticity in its representation of certain qualities than a human form and thus Nandi is important in that respect. valley excavations bore many seals gracing bulls on their face.

In the Pati-Pasu-Pasa Triad, Pati is Siva; Pasu is the individual soul compared to animal-man with impurities, and Pasa is the tether that binds us. Pasu is wild like the testosterone charged raging and charging bull. Siva makes the bull tame, tranquil and pure by removing the malas (மலம் = impurities). Once the impurities are removed, the individual soul receives Spiritual Knowledge (தெருள்) from Siva. With Terul (தெருள்) in place, the soul acquires Grace (அருள்) and becomes one with Siva.

Nandi is ‘one of a domesticated form of cattle, Bos taurus indicus, of , having a large hump over the shoulders and a large dewlap.’ 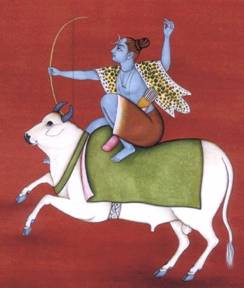 Yama, the god of death, treats Siva and his devotees with extreme deference ever since his minions (yama dutas) came to capture Siva’s devotee, Markendeya, the likes of who are under the protection of Lord Siva who is Supreme to all gods.

There is no God like lotus-like Siva, whose matted hair shines in splendor. Without him, there will be no celestials, no austerity, and no liberation. He is the father, the mother and the guru. He is Nandi, the bull, who is regarded as the formless form of Siva.  He holds the worlds in their spheres in the high Heavens, and he is the Fire, the Sun, the Moon, the Mother of rain clouds, the mountains and the oceans. Men and gods come and go, Siva is eternal.  Why do the celestials, gods and men go after the transient gods?  He, with the vertical third eye, is the Supreme, and he is mainly concerned with his devotees. Mal (Vishnu) who strode the earth in one pace, Brahma who sits on the Lotus seat and the gods who know heaven, have not found the ends and depths of him. He transcends them all and his glance is his Grace. He transcends the Mayan, Vishnu, Brahma, and his own forms Isan (Rudra), Hara, and Mahesvara.  He is Brahma, Vishnu and Hara and sits in the heart of all souls where his divine splendor knows no contraction.

His abode is the holy that reverberates with thunder and pervades with the fragrance of flowers.  He confers wealth to Kubera, kills the elephant-monster Gaja Mukhsura, who had the temerity to challenge the Supreme Lord, and confers freedom from birth to Vishnu, Brahma and other celestials. He seeks those who seek him and saves their souls. He controls the god of Fire who once was put down and put out by the Lord in the Northern seas, when his rage was consuming the world.  He stands by those who sing his praises and seek his feet as their refuge. He gives refuge to those who shake off their faulty perceptions and thoughts and stands by them with kindness. Maya comes to nothing to those who kneel before him who is birthless and deathless and who never lets down those who seek him. He becomes visible in the guise of a guide to those who give their body, mind and soul to the Lord. Tirumular: ‘He is the kin that I wait to see and clutch his feet and he is the axle-rod that holds the wheels together firmly in my heart. I seek knowledge from him, just like a calf seeks milk from the cow.’  He shows the path when we follow his path of goodness, sing his praise, and adore him. Those, who worship the Lord of the soul will break their bonds, cross the , and reach the other shore (become one with Pati.)